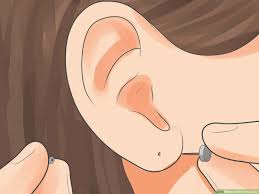 Have you ever done anything in your life that would amaze you today? I mean, simply amaze you?!?! I was prompted by a Facebook post with a prompt I can’t remember, but it made me think about the time I got my ears pierced…. Wait for it…  I chuckle to myself a little right now.

Let me set the background for you. It’s 1973, I’m six and a half years old. We live in a two-story, Section 8 apartment in the Ghetto of Santa Barbara. My mom has left her abusive marriage and me and my two younger brothers are living with our bio-dad Orval. Orval sleeps during the day after a drunken night. I’m up early in the mornings usually, watching Sesame Street, and on a Saturday, I’d watch Scooby Doo. Our neighborhood was predominantly Hispanic, and my two closest friends were Hispanic, Michelle and Yvette, from two separate families. Yvette had two brothers and an older sister. Her mom would pierce the ears of the neighborhood girls and I would watch.

Mrs. Castro would place a cookie sheet with a short length of white threads into an oven to sterilize the threads. She would sterilize a sewing needle with a match until it glowed bright orange at the tip. She then would wipe it with a cotton ball that had rubbing alcohol on it. She would take the pan out of the oven when the thread was properly heated enough to be sterile and let the thread cool for a few minutes. She would prep the needle by putting the thread through the needle as if one were to sew and she would set it aside.

She then would take an ice cube and place it on the ear lower ear lobe of the girl whose ears were going to get pierced and numb the ear. Once the ear was numb, she took the needle and poked it through the frozen ear lobe, until the thread was about half-way through. She would take the needle out of it, tie the thread so it made a loop. Then she would do the same to the other ear.

The purpose of the thread was so that it would give the ear time to heal and be easy to clean with alcohol several times a day. She would pour rubbing alcohol on the thread until it was soaked and move the thread a couple of rounds through the hole in the ear, aka piercing, thus keeping the hole from closing, causing it to scab. This was done for 30 days before the girls would and could wear earrings, which were usually gold or silver round studs.

I always wanted my ears pierced. I have fond memories of walking to the nearby elementary school to a swap meet of sorts and being given a pair of drop-down, screw on earrings. They were gold, with a long metal bar with an orange and yellow petal flower at the end. I would put them on and tell everyone I got my ears pierced. I don’t know who I was fooling when I think back on it, I’m sure people thought I was crazy!

I’ve never considered myself a strong-willed child. In fact, I was rather shy and timid, but at age six, I might as well have been 20 years old. I was rather mentally and emotionally matured for my age with all the responsibilities given to me at such an early age.

It was an early Saturday morning, I was six and a half years old, my bio-dad and brothers were still asleep. I had cartoons on the TV, and I get a wild hair to pierce my ears. Did I go to my friend’s mom to have it done? NOPE! Hindsight, I probably should have!

After having watched it being done so many times, I pierced my own ears. I did it just like Mrs. Castro did, sterilized the thread in the oven, heated the needle with a match (which I had done before to take splinters out of fingers) until it glowed orange. But I have to say, I think I perfected the piercing experience. I went to our upstairs bathroom and got the Campho Phenique, the stuff you put on bug bites, and the Chloraseptic, you know, the dark green stuff that sprays into your mouth to numb your sore throat? Yea, that stuff. I took those along with ice and numbed my ear lobe. I numbed it good! I didn’t feel a thing when that needle went through. I felt it 10 or so minutes later when the numbing wore off, but I stuck that needle right through my ear with that string on it.

I had the most difficult time trying tie that darn string though. I gave up. I found some silver metal flat tacks and placed those in my new ear holes and wore them around as earrings, until…

My ears got infected! My mom came for a visit the next weekend and saw what I had done. She cleaned my ears and put some antibiotic ointment on them. She knew me well enough that I would just do it again, so she bought me a pair of stud earrings to replace my tacks. You may be asking yourself if Orval ever noticed. Nope. It took my mom telling him.

And guess what?!? I did it again at age 15 because I wanted a second set of holes in my ears. It was the early 80’s and this time I was living with my mom and stepdad Larry in the small country town of Coarsegold, just 30 miles north of Fresno. It was a random day, and my parents were gone for the day down to Fresno. I honestly cannot remember the exact day I did it, but I did it the same way, but without the tacks. I used a pair of studs I bought. When my mom came home and saw my ears, she warned me they could get infected, but she knew there was no talking me out of it.

I still have both of these piercings, my first and second holes. To think that I’ve had my original piercing for 46 years! And my second piercing for 37 years! I don’t have problems with them either. My left ear now has a third piercing, but I got that done professionally at Claire’s at the Mall. Ironically, I got both of my ears a third piercing from the same place in my 30’s, but my right ear piercing kept getting infected and I don’t think the hole was straight because it was difficult putting earrings in. I let it close a long time ago.

A note to parents: Do not leave your kids alone to do weird, grown up stuff. Where there’s a will, there’s a way. That’s all I have to say!

Hi, Friends. Thanks for joining me on my journey as I write about life. I'm currently writing a book about my life in the hopes that it can be inspiring and encouraging to others. You'll see as you continue on the journey with me the hills and valleys that have made up my life, as well as the wonderful blessings in between. I look forward to interacting with you. View all posts by karaorella